3. Stress and parts of speech

By the way, you didn’t mention anything about accent. But it seems like you put it on the second syllable from the end of a word.

Oh, how do you figure?

That’s just what I’m picking up!

You didn’t look it up behind my back?

Why would I be keeping notes behind your back?

Well, as you say, the accent or “stress” in Lojban words in generally on the second syllable from the end.

(Is she ignoring me?) Ah, see, never doubt a girl’s intuition.

But the rules are actually slightly more complicated depending on the part of speech (like adjective, verb, interjection…) of the word. So now would be a good time to introduce those!

In Lojban, the parts of speech are intricately linked to the morphology. That is to say—

You can tell from the spelling of a word what kind of word it is? So it’s like different parts of speech have different “shapes”, right.

(Why’d she interrupt me?!) That’s right. Broadly speaking, there are three kinds of Lojban words.

And again, remember, when we write consonant here, that doesn’t include the apostrophe {‘}, even though it makes a “h” sound.

Summarized in a nice table:

Oh, it’s easy to understand in flowchart form. Something like this: 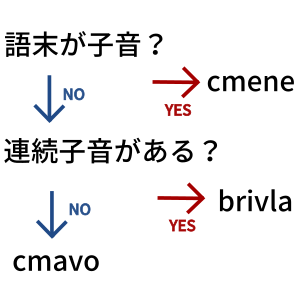 That’s right. So, “ends in a consonant?” and “is there an early consonant cluster?” are the two most important questions!

It’s worth noting that, because cmavo don’t contain consonants except at the start, it’s okay to drop spaces between them in writing. For example, it’s OK to write {pu zi ze’u ri’a vi ve’a} as {puzize’uri’avive’a}.

Oh, that’s a convenient bit of freedom. But I might run into situations like, “I don’t recognize this word shape!”, right? So I should always check if it isn’t just a series of cmavo.

Back to accents! …Well, this is actually all there is to them:

Hooray, accents! The function words bit is a little complicated… but, I guess if I just never stress them, I can’t mess it up?

That’s right. …Oh, later we will cover a way for cmevla to have their accent marked elsewhere, but—

Let’s not overcomplicate things! I’ll stick to the “2nd syllable from the end” rule of thumb for now.

Words introduced in this lesson